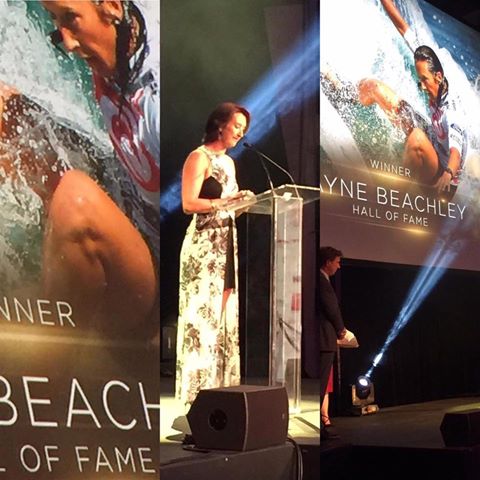 Layne Inducted into Women’s Health I Support Women In Sport’s Hall of Fame!!

Wow! Another award to add to Layne’s already huge list of achievements!

Layne Beachley was inducted into the Women’s Health I Support Women In Sport’s Hall of Fame this week. There is a high criteria to meet to even be considered for this achievement – and there was no denying Layne met each and every one of the points listed. In her own words, Layne describes what the night meant to her, the importance of these events for women in Australia and how proud she is to have been recognised and inducted into ISWIS Hall of Fame:

The Women’s Health I Support Women In Sport Awards are a night of glamour, excitement and an opportunity to rub shoulders with sporting royalty, and for me it’s a chance to catch up with old friends and current female champions. Among the inspiring speeches there was sentiment shared suggesting the desire to no longer need events of this nature. Events where we no longer recognise, celebrate, award and bring together extraordinarily talented women and share their achievements with the world. I am woman hear me roar! There will always be female pioneers. When we do reach equality in the world of sport, I believe nights like this will become even more important because it provides us all with the opportunity to stop, reflect, recognise and give thanks to the performances of the women that inspire a community, a generation and a nation! Who doesn’t want to be in a room with Anna Meares, The gold medal winning Australian Women’s Rugby 7’s team, The Campbell sisters, Olympic divers and 7 time world champion Caroline Buchanan, just to name a few! Seriously, The I Support Women In Sport Awards is one of my favourite awards nights of the year, along with my own Aim For The Stars annual Gala, the Surfing Australia Hall of Fame Awards and the Sport Australia Hall Of Fame awards coming up on October 13th in Melbourne. All of these have a commonality and that is recognising and celebrating the significant achievements of courageous, tenacious, disciplined and focussed athletes who not only contribute to their sport but to the lives of everyone who cheer them on and draw inspiration from each and every performance.
Last night I was humbled and honoured to be inducted into the Womens Health I Support Women In Sport Hall Of Fame. When I read the criteria detailed at the end of this post, I was proud of how I fulfilled every aspect of it and indebted to surfing because it has presented me with the opportunity to continue to leave a long lasting legacy, both in and out of the water. To stand in front of that room, full of accomplished business leaders and champion athletes, and accept an award that belongs to so many other women, I felt truly grateful for the recognition, inspired to work harder to break down more barriers and a deep sense of belonging to another kind of sisSTARhood that fosters empathy, mutual respect and admiration.
Women’s sport is beginning to receive the recognition it deserves and there is still a long way to go.
Thank you to Women’s Health Magazine, Felicity Harley, Jacqui Frank and all the sponsors and supporters of these wonderful and prestigious awards. I look forward to celebrating the outstanding achievements of women in sport for many years to come!
Layne x #womenshealth #ISWIS

ISWIS HALL OF FAME
She’s reached the highest level of her sport and should be applauded. Let’s enshrine her into the ISWIS Awards Hall of Fame

· Has retired from the highest level of competition in her chosen sport.
· Made an outstanding contribution to the sport while competing.
· An inspirational athlete based on her performance and courage in sport over a significant period of time.
· The nominee must have displayed exceptional sportswomanship at all times while competing.
· Advocates for women and increasing the profile of female athletes.
· After retirement, has given back to their sport or sport in general demonstrating dedication, skill, knowledge and expertise to current, and up and coming athletes.
· Has mentored younger athletes and is a top role model in their chosen field.